The Molson Brewery is the Centre Sud’s oldest industrial establishment. Located at the same site since 1786, the company left its mark on Montreal’s economic development. In addition to brewing beer, the Molson family was involved in various businesses over the last two centuries. The eventual departure of Molson will mark the end of an era.

Around 1939, the Molson Brewery publishes a brochure for its employees titled Now you’re with Molson’s. The document contains a wealth of interesting information about the company’s history, the production of beer, and the working conditions at the time.

When John Molson founds the brewery, Montreal is still relatively undeveloped and the banks of the river are not yet set up to meet the needs of commercial shipping.

Around the middle of the 19th century, the site includes numerous industrial buildings, as well as a small church and an educational institution—Molson’s College—erected west of the factory. 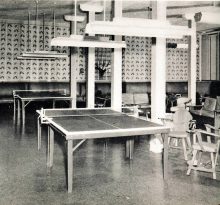 ﻿Employees at the Molson Brewery benefited from certain advantages directly at their place of work. This included a right to recreational areas and even medical services. 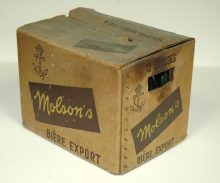 In another era, large bottles were the most popular among beer enthusiasts.

Brewed since 1903, Molson Export was still popular in large bottles in the early 1990s.

Bottles have come in many different shapes and sizes.

A promotional object from a tavern. A plaster molding illustrating a scene in 1786, the year of the brewery’s founding.

Do an online donation